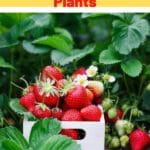 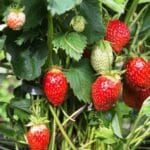 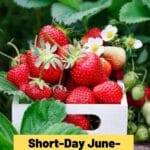 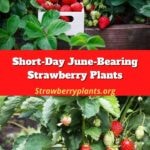 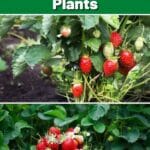 Strawberry plants are constantly being cross-bred and tweaked through dedicated breeding programs across the United States, in Canada, and other locals across the globe. There are multiple reasons for this constant selective work on the various members of the genus Fragaria. Strawberries are developed in order to maximize genetic potential so that certain goals are attained. The most common goals are increased production of larger strawberries and increased plant hardiness and vigor for specific climate, region, or growing conditions.

This constant search for a better strawberry has led to multiple different types of strawberries and multiple different cultivars that each possess unique characteristics and production patterns. Hundreds of different varieties have been developed over the years. Some produce big berries, some medium, some small. Some grow well in even the northernmost regions while others flourish in the south. Some strawberry plants produce one big crop of strawberries while others produce multiple crops or constantly produce throughout the growing season. (For a detailed discussion of the various types of strawberry plants, see the Strawberry Varieties reference page.)

As mentioned on the Strawberry Varieties reference page (link is above), June-bearing strawberry plants are generally the ones that produce the largest strawberries. Because of this, they are also the most popular. They get their name from the single, but large, strawberry crop they produce. Their fruit is typically ripe when May rolls over into June. This time of harvest gives this type of plants their name: June-bearing. Of course, in warmer climates the harvest is earlier, and in colder regions the picking commences later.

The short-day reference alludes to something that seems to be a contradiction at first glance. The longest day of the year in the Northern Hemisphere is in June, the summer solstice. So, how can a June-bearing strawberry plant be a “short-day” strawberry?

The answer is actually quite simple. As the strawberry industry developed and strawberry cultivars were refined through breeding programs and selection, several varieties that were naturally well-adapted to grow in the traditional fashion with a large June crop proved to grow quite well with fewer daylight hours as well. They were still considered June-bearers due to their traditional production characteristics, but due to the fact that they were able to be grown during seasons with less daylight (namely winter), they earned a new moniker: short-day.

So, the varieties that do well in Florida and California during the winter months are called short-day June-bearing strawberries, even though they are producing strawberries outside of the months of May/June.

Short-Day June-Bearing Strawberries: Why, Where, When

These strawberry varieties that were able to be grown in the Northern Hemisphere (in regions with milder climates) during winter with relatively little hours of daylight have become a boom for the strawberry industry. Instead of only growing strawberries during the spring/summer months, most of the year can be dedicated to producing strawberries. This provides consumers with a much less expensive way to get fresh strawberries (cuts out the added cost of shipping strawberries from another hemisphere). And, strawberry growers don’t have to let their productive land sit idly by. So, the rationale for short-day strawberries is that consumers get more strawberries for less, and the growers generate more revenue.

The two major geographical regions that employ short-day June-bearing strawberry plants to produce during the winter months are California and Florida, with a few other coastal regions also able to make use of these strawberry plants. The climate of these two states make them the source for most of the strawberries in grocery stores during the “off” seasons.

And, as the name implies, the days are shortest in the winter months. So, by selecting June-bearers capable of growing an producing well with less daylight, the strawberry growing season carries over virtually year-round. I, for one, say “hooray!” for short-day June-bearing strawberries that can flourish in the winter!

This is not an exhaustive list, but some of the most popular and prominent short-day strawberry varieties are:

As I noted in a previous post about short-day strawberries, it is mainly commercial strawberry farmers who make the most of these plants. But, this information is good to know and can help gardeners know which fruits can be produced in the winter months.

More recipes you may enjoy